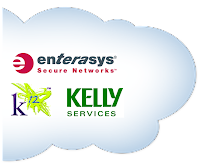 Yesterday, we were fortunate to sit down with leaders from three companies who are really embracing the notion of cloud as a business strategy, rather than just an IT strategy. Our CEO, Chris Barbin, moderated a panel featuring Ben Doyle, VP of Sales Enablement & Analytics at Enterasys, Dianne Conley, VP of Marketing Systems at K12 and Judy Snyder, VP of Global Applications at Kelly Services. Each of these companies has embraced the cloud and used it to drive amazing business results including Enterasys growing at 6x other networking companies, K12 growing at over 30% and Kelly Services providing employment to over 500k+ people annually.

What is your company doing in the cloud?
Ben Doyle, Enterasys: We deployed 20 cloud apps and it’s been transformational for us. We now have social customer interactions in private chatter groups, social sales forecasts, opportunities that chatter and even routers that chatter!

Dianne Conley, K12: We had a legacy CRM that was hamstringing K12. Our CMO and I sat down with our Ops team and decided we needed to make a change. We wanted to transform our customer experience, not just replace one platform with another. I came by myself 3 years ago to my first Dreamforce where I met Appirio for the first time.  Soon after that, we evaluated Salesforce and Oracle. We started implementation in Aug 2011 with Service Cloud for enrollment and our customer care centers globally. It’s been very successful but we’re just getting started.

Judy Snyder, Kelly Services: Our cloud transformation started in IT. We’d implemented Sales Cloud globally and then in 2009, we decided on a cloud-first strategy in IT. We deployed Chatter globally as our collaboration platform. We also implemented the Microsoft cloud for email. And we implemented Service Cloud and IT help desk.  Our goal is to be 100% virtual – we want to find people anywhere in the US, recruit them, onboard them, train them using virtual classrooms, give them a sense of community so that they engage with each other, measure performance and incentivize with gamification. We are looking for ways to grow without adding physical locations.

Where did you get started and how far into the journey did you start to realize it was transformative to your business?
Ben Doyle: We started with Sales and Service Cloud in 2003. Around 2007, we started looking to replace our home-grown quoting and config tool that wasn’t performing as we needed it to and was costing a lot to support.  We looked at the AppExchange and went with BigMachines. It was a very successful strategic project that gave us lots more visibility at the opp level than we’d ever had. That project was the catalyst for us adopting a cloud-first IT strategy in 2010. Now, when we evaluate a new business need, more often than not, we find that we’re more comfortable with a cloud solution.

Dianne Conley: Within 5 months, we were piloting the application. Typically we’d only be about halfway through requirements collection at that stage. We embraced agile and realized we could accomplish great things in a short amount of time.  Agile has been transformative to our business. Even our COO is pushing agile. It’s given senior management the confidence that we as an organization don’t have to labor over things for months and months.

Judy Snyder: The pivotal moment for us was when our cloud apps moved from internal IT apps to customer-facing applications that generate revenue.

What was the biggest surprise or biggest unexpected obstacle?
Ben Doyle: Change management. We recently moved off Outlook to Google Apps which was a big change. We were really surprised at the amount of education and hand-holding needed to get people to change and embrace something new. It’s also not just about getting people to accept change but training them to make the most of new tools. IT used to be 66% operations and 33% applications and with cloud, it’s the opposite. In a cloud-first world, IT has to be user-centric. We’re changing the culture of the IT function to support business.

Dianne Conley: We too experienced some change management challenges. Our management team had bought into what we were trying to do but to get our IT team engaged and aligned was a bit of a challenge. We learned that the first thing to do was to build a team that trusted each other. In an agile project, we didn’t have everything documented so we needed to build the trust to work together as a team and figure out challenges as team.

Dianne mentioned the C-suite was on board at K12. What was catalyst for the C-level engagement at Kelly Services?
Judy Snyder: Two things. First, our CIO loves Chatter. The other was seeing the customer solutions – seeing what we can deliver to external customers quickly – which was the revenue generation piece. As soon as we had customer-facing applications, the lightbulb went off and IT was no longer just a cost center.

Ben Doyle: For us, when our CEO started Chattering, it was a really big moment. Toward the end of a quarter, he started Chattering about sales wins. Everyone likes to see the CEO talking about deals we are winning. That built momentum, and other execs started to chime in and contribute. It’s really made our organization much more collaborative and has paved the way for making our own products social.

Beyond Salesforce, what cloud apps are you using?
Ben Doyle: The power of having a cloud-first IT strategy is being able to take advantage of the ecosystem cloud vendors have. For example, we’re using Box which is completely integrated with Salesforce. We also use Google and Smart Sheet (cloud-based PM tool) which also connects to Box. It’s much easier to assemble a set of cloud apps that easily hook together without any deep technical integration than trying to do something comparable in the on-premise world. And the sum of parts is much greater by taking advantage of all these cloud apps. For example, we can use Appirio’s tool to bring relevant lead and opportunity information from Salesforce right into Gmail.

Audience: This is clearly a big change for IT, how do you manage that?
Ben Doyle: We’ve had some turnover, but not a lot. We said from the outset that your job may change but there’s still a need for people with the skills to take advantage of these cloud applications. For example, about a year after we deployed Box to make content available on mobile devices, our ops team is now looking at decommisioning servers and reducing footprint. Frankly, it takes a bit of time for IT operations to adjust since it’s a more dramatic shift for them.

Judy Snyder: We experienced the same thing. Our sales team brought in CRM and our IT team was resistant at first. Our IT team since has embraced the Force.com platform and are starting to see Force.com as a career path. It helps their resume for their next job if nothing else. Developers see it as career enhancing to learn Force.com. The only issue is on the infrastructure side because there are no servers on-site.

Dianne Conley: The guys in IT that we partnered with were all seen as heroes. In the past, when they couldn’t deliver, they got a lot of grief from the rest of the organization. Now that we’ve given them the tools to become successful, everyone wants in!

What is one thing that each of you would have done differently if you had the chance?
Judy Snyder: I wish we’d have done it sooner, I was in IT and was a resistor at first. I was conservative, worried about internal controls, compliance – and was nervous. In retrospect, I needed to be less risk-averse.

Dianne Conley: There are a couple of technical things we would have done differently. I probably would have tried to work more closely with folks that were going to be end-users of the applications – enrollment and customer support agents – rather than business analysts and higher level managers. We had to spend a good few months optimizing based on what end-users actually needed rather than what their bosses thought they needed. Now, we’ve built a very tight relationship between the Salesforce administrator and the actual folks on ground. She has a desk there and talks to end-users all the time.

Ben Doyle: We had a group of users that were early adopters, the middle and then those that struggle. I would have spent more time with the laggards to help them embrace the change. We went from using desktop apps to only a browser. We underestimated the amount of work needed to help people adopt new business habits.

Summary
The common lessons across our panel of cloud powered business innovators are the following:

If you want to share your story about using the cloud to drive business strategy or have questions about how to make this happen at your company, tweet @appirio or leave us a comment! 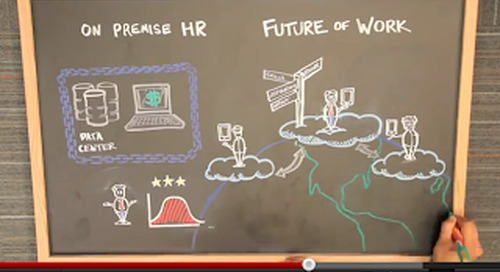 Information and People – The Keys to Your Competitive Future 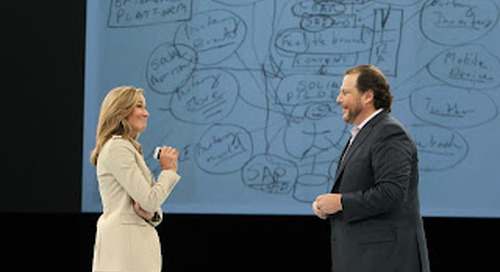 by Balakrishna Narasimhan (@bnara75)  If you’re in enterprise technology, the Dreamforce keynote is an even...