Social, Mobile, Cloud – You Need All 3

You know something is going to be big when the analysts start comparing it to electricity.

Now, social computing has officially reached that point in the hype cycle: Gartner analyst Chris Fletcher is comparing it to electricity here at Jive’s “New Way” tour in San Francisco, using the analogy of water mills being disrupted by a “New Way” of working. Back then: electricity. Today: social software.

“Social software is going to be the next big thing in enterprise apps,” said Fletcher. “We’re not going to throw away our ERP systems– that’s not going to happen, and it shouldn’t. But we’re seeing a new type of electricity coming into the industry that’s changing how we communicate with each other and with our customers.”

Here at Appirio, we get excited about what happens when the social, mobile and cloud trends come together in the enterprise. For example, here’s a video from late last year for what can happen when social cloud applications are accessible on any device.

Of course, not every enterprise is convinced that these 3 things go so naturally together. Tony Zingale, CEO of Jive, offered this perspective on how their enterprise clients are thinking about the cloud:

“We host Jive for thousands of customers, but we recognize that there’s a whole class of companies that aren’t ready for the cloud,” said Tony. “In particular companies dealing with PID, HIPPA, financial regulations, workers council issues in Germany, and the list goes on and on. We think that the private cloud will make its way into the enterprise, but in the meantime, we’re not religious about it. We’re not parochial about it. We do both– it’s harder for us, it’s more expensive for us, but the market is asking for it. And we’re the only vendor who does that.”

While we love what Jive is doing in the social enterprise, I have to point out that these objections to the cloud are all complete red herrings— Appirio has worked with dozens of companies in industries ranging from healthcare to financial services on cloud applications that handle very sensitive data. Cloud apps can be architected to navigate the constraints of nearly any regulatory, privacy, or information security environment. And you really do need the capabilities of cloud services to make the most of mobile & social in the enterprise. Tony acknowledges that there is a heavy cost to Jive’s hybrid deployment model– that’s why Jive is actively moving customers towards cloud deployments, and offers more and more of their capabilities as multi-tenant services.

One very interesting thing that Jive is doing to bring social computing to the cloud is using the Open Social standard to act as a “container” for true cloud applications, including apps that Appirio is building to bring information from cloud apps like salesforce.com into a Jive community (our app was shown on stage at today’s event!).

This is the same technology that we use to bring salesforce.com to Google Apps. And at an Open Social Summit the other week, I saw a demo of how these same types of Open Social gadgets could also run across multiple mobile devices. Now there’s potential for a solution provider like Appirio to write a single gadget that allows people to work with their critical business data wherever people want to work– in their Google email, in their Jive social community, or on their mobile devices.

Seeing mobile, social, AND cloud come together in the enterprise to change how people work, driven by a community of developers and standards like Open Social… now THAT’s something that truly deserves to be compared to electricity. 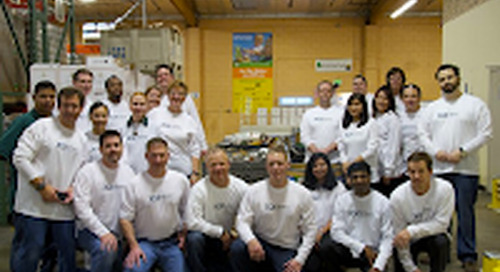 The Real Future of the Cloud

Narinder Singh Appirio and Silver Lining Our Inspiration to Be Public Appirio and Dreamforce 2011 – The USC...