September 12, 2012 Appirio
@singhns
(A 3 part blog all rolled up into one.  Don’t worry, the really geeky Star Wars analogies are at the end)
Given salesforce.com’s leadership in the commercialization of cloud computing for business, each year Dreamforce feels like New Year’s Eve (for the cloud).  It’s a milestone event people plan around, sets off a huge set of social rituals (parties), and for me, it leads to reflection and contemplation for what has come to pass and what will happen in the coming year.
Why is this year different than the past ? For me, it’s not the people registering (may approach 80,000) or the celebrities (Sir Richard Branson, Jeff Immelt, Collin Powell, Tony Robbins) or that this will be the last Appirio event held at the MOMA for several years (due to renovations).
What makes this year different is that it feels like the beginning of the epic battle that concludes every great story.  The climatic scene you know is coming and that everything else builds up to – Achilles facing Hector, the storming of Normandy, the final battle in Lord of the Rings, the confrontation with the Death Star in Star Wars and Return of the Jedi.  It is the outcome of these moments that decide the fate of many beyond those directly engaging in the battle.
This Dreamforce, more than ever before, it’s about more than the main character (Salesforce). It’s about the epic battle between history and progress, the clash of cloud with on-premise across every part of the business, the battle between social and control.  If you have spent your career around the intersection of business and technology –  the moment has a dramatic tension, it’s the instant before all hell breaks loose in the battle for the future enterprise application architecture.
Next week we will see Salesforce align with Workday more directly than ever before.  They will together represent a threat to the majority of revenue collected by SAP and Oracle.  They will help redefine what a system strategy looks like in the future. In fact, Marc, the original cloud rebel, may actually be the Han Solo to Aneel’s Luke Skywalker.  Marc’s efforts carved a path never before seen, whereas Aneel’s work, with the very well known HR and Financials areas, strikes to the very core of the old empires of Oracle and SAP.
Yet it’s about more than just the goliaths of the past and the future battling each other.  At every turn there’s a tension between the highly structured IT systems and business processes of the past with the collaborative, social, be everywhere mobile world we live in.  Dozens of vendors will introduce solutions that help us navigate the new world with control – instead of trying to take tightly controlled, physically and emotionally closed systems of the past and adapting them to the new world. It is the battle for how you will get to the future that is perhaps most important for customers – will your future build on the foundation of the past or reinvent the future ?
To understand the extent of this clash and why now is so pivotal, lets look at what brought us to this moment.
Systems began by organizing around the structure of a company – Sales, Service, Marketing, Finance, HR, Manufacturing, etc.  As gaps emerged, organizations undertook expensive, necessary, never-ending, partially successful initiatives to create a 360 degree view of the customer (a term used ad-nauseum over the years).  IT strategies and systems of the past placed a premium on control, governance and structured processes.  This resulted in a strong desire to “get things right” and a recognition that the foundation would ground an enterprise’s systems strategy for a release cycle or 5-10 years.

While this highly structured IT approach created consistency, it struggled when that consistency was challenged by changing business conditions.  As a result IT became associated with being slow and unresponsive to the needs of the business, when in fact it was their design principles (appropriate at the time) that led them to optimize in ways that created this rigidity.

Over time frustration rose because of this rigidity, but there didn’t seem to be any alternative.  Businesses just assumed this was the way it was.  People like Nicolas Carr wrote “Why IT Doesn’t Matter Anymore” (2003) because innovation was slow, incremental and often easily replicated by others. Enterprise technology looked more like the auto industry than the harbinger of “creative destruction.”

The Internet changed everything.
The Internet showed the power of the collective.  By placing everyone on a shared platform we saw innovations in content and collective contribution.  Then we saw innovations in connecting information from multiple sources with great ease to produce things substantively more than the sum of the parts.   All of a sudden, the most important person was the user and “systems and solutions” designed themselves around the user.  Once “you” became the central paradigm, social became a natural extension.  And finally mobile transformed technology from something you used only when in front of a computer to something that’s an integral part of your whole life – wherever you are and whatever you’re doing.
Even if we just stopped here, our expectations of enterprise systems would be fundamentally different than they were in the past. Having experienced complicated and powerful applications that are simple and natural to use, we start to expect the same of internal systems.
Yet, something else happened. Because the Internet connected people together at scale, it became possible for people to organize themselves like never before through social mediums like Facebook and Twitter. In that instant a world where businesses just pushed information out to consumers was gone forever. Consumers could have conversations at scale about everything – including your products and services. The amount of content they generated about their own preferences, their experiences with products, and how their lives were impacted dwarfed anything a company could control with its own marketing efforts – no matter how significant.
So now, the old world of systems and IT strategies faced what appeared to be a two front war.
1.  Trying to match expectations for simple, easy to use and powerful systems that treat the user as the most important constituent (rather than a necessary evil) – and are available from anywhere on any device.

2.  Attempting to capture a true picture of the consumer and market in a world where there is far more information and dialogue outside a company (via the Internet) than within a company’s own systems. Addressing the 360 degree view of the customer became a completely different animal.
The second driver is so broad that it impacts far more than the systems.  It changes the very nature of relationships between brands and the customer, and changes what it means to be in sales, marketing, service and any part of the business that engages with the customer.  All of a sudden, you have to deal with each customer as a person, where their purchases of your product are just a small part of their story.  This in turn has created a third challenge for systems.
3.  Systems inside the company need to be organized around customers instead of functions.  Structured and unstructured collaboration need to occur faster and in ways never envisioned by the applications serving each functional silo.
The customer has become a far more important driver of what each employees does than where they sit in an organization.  In addition, because our worlds as consumers and workers don’t exist in vacuums, we expect our work systems and worlds to behave like the rest of our life.  As workers we want a greater voice in how things function, to connect to people at various levels and roles to accomplish our jobs, and for ideas to rise because of their merit instead of where and at what level they originated.  And that brings us to our final disruption.
4.  People in organizations, particularly information workers, expect to be treated with the same principles that govern business relationships with customers.  Rewards and recognition, collaboration and how the business supports an employee’s current and future success at work become something that require more than just the right incentives. Your people expect the same technology capabilities that enable collaboration with customers to be a part of their life inside your company.

The climactic battle that Dreamforce is about to start is about far more than technology change.  It is not, as so many pundits have tried to frame narrowly as simply another technology change analogous to mainframe to client server.  It is about the soul of how innovation in information, technology (internet/cloud/mobile) and social has changed our society and will ripple through businesses.
Even Oracle and SAP no longer debate cloud. They are instead reacting and in the midst of reorienting their own financial models and product portfolios.  They battle the cloud leaders over who can be the best partner for organizations in navigating through this transition.  They are betting on varying rates of cloud adoption to give them time to create solutions aligned with this future. They will try to convince customers that their stability with the past will make them a safe choice for the future.
Cloud providers in turn make the simple case that the very traits that made old world companies successful will prevent them from moving forward.  If this argument holds, it’s nearly impossible for the last generation’s bullies to be the right answer for tomorrow.  Alliances between cloud leaders like salesforce.com and Workday (and Facebook and Google), and the ecosystem of cloud players that come with them, bring forward the battle for the entire enterprise to today.  They speed up the timetable for the old guard to react.
Fundamentally companies like salesforce.com, Workday, Facebook and Google are designed for a world where collaboration occurs across your organization and directly with customers and partners as organizations and individuals. Except for manufacturing and supply chain operations, these solutions can create an enterprise backbone for how any company can create products and motivate employees to engage with and delight customers
The companies that have first adopted these new technology platforms as their new enterprise architectures are those who are more often dealing with consumers in fast-moving environments (e.g. Facebook, Twitter, Netflix and other internet companies) or those who have the advantages of starting fresh (e.g. Appirio).  But dismissing cloud as only suited to the needs of companies like these is missing the point. These companies had to change first because of their business strategies and the realities of their market.  They had to change first because they are at the forefront of industries where consumers want more and strategies more dynamic – an inevitability that is coming to every industry.
Dreamforce 2012 will be the beginning of the next epic battle.  The cloud and all it represents has won hearts and minds.  Now the question will be how fast the body of business will evolve and who will shepherd that transformation.  The final scene of this chapter begins next week and we at Appirio can’t wait!
For Star Wars fans see the Special Tribute Blog that carries the Return of the Jedi analogy way too far! 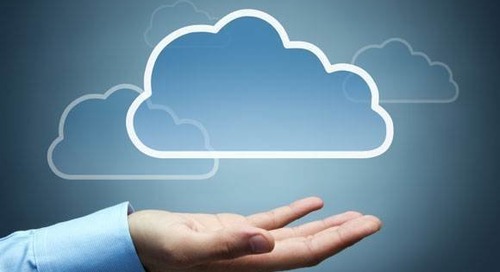 by Chris Bruzzi (@chrisbruzzi) and Nick Hamm (@hammnick)   As Dreamforce nears and Appirio completes its 6t... 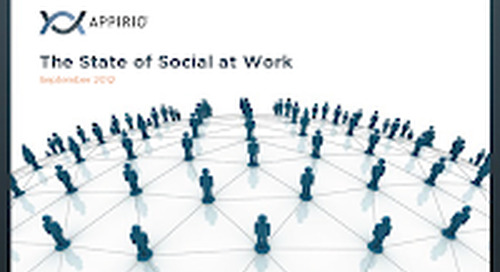 The State of Social @ Work – The People’s Perspective (Finally!)

By Balakrishna Narasimhan (@bnara75) There’s no question about it.  Social media is having a huge impact on...