Why Is Appirio Expanding into Indiana? A Q&A with Indy Cloud Architect, Nick Marson (@NickyScarfa)

By: Steve Pruden (@stpruden), Director of Consulting Services and Head of Indianapolis Office

Six years ago Appirio started as a small company with a couple of cubes in Salesforce.com’s AppExchange incubator in San Mateo, California. Now we’re a global company headquartered in San Francisco employing nearly 500 cloud experts worldwide, and supported by a cloud developer community of 45,000 developers in 65+ countries. We have offices on three continents, but today I am most excited to announce our expansion into my hometown, Indianapolis.

Indianapolis?! Why not Munich or Sydney?

Well, maybe someday we’ll be there too, but for now Indy makes a whole lot of sense for a rapidly growing company like Appirio. First and foremost, building an office and a modern Cloud Development Center in the Midwest gives Appirio and our customers access to a large, highly-educated pool of technical talent that can invest in, grow, and develop into a team of next-generation cloud architects. This team will not only be in close proximity to our U.S.-based customers, and partners like Salesforce.com and Workday, they can also support customers worldwide. We Appirians have become experts in using social and cloud technologies, as well as our own Appirio Services Platform, to collaborate very well virtually.

Today co-founder Narinder Singh and I joined Indiana Governor Mitch Daniels on stage at a press conference to announce our plans to bring at least 300 jobs to the City of Indianapolis over the next three years. You can read the official statements in our press release, but for this blog, I thought it’d be much more interesting to get a more personal perspective from one of our employees on the ground in Indy, Nick Marson.

Nick, you’ve been in the IT industry for over 10 years but decided to leave the traditional IT world behind and bet your future career on public cloud technologies. Why?

After spending eleven years in various, traditional IT roles, I was ready for a new challenge. For years I’d rolled with a slogan, “enabling with new tech, gracefully releasing the old”, but my previous roles didn’t afford the the luxury of exercising this approach very often. Much of my time consisted of installing Microsoft security patches, maintaining the Exchange Server, rebooting the SAP farm (a weekly task), and maintaining big, dreaded APC uninterruptible power systems. During the most recent couple of years, cloud computing became a growing part of my professional life, and I enjoyed the work. When Appirio decided to open an office in my hometown, I jumped on the opportunity to go “all in” with the public cloud.

What made Appirio stand out for you initially?

“We started Appirio with the mission to change an industry and the kinds of folks at Appirio are passionate about that.  They’re in to looking at things differently than people have seen before and using that difference to make businesses’ and companies’ lives better.”

Narinder’s words—along with Appirio’s innovative take on technical consulting and their dedication to the public cloud resonated with me and eventually changed my career path. When Appirio chose Indianapolis to land its second U.S. office(and here’s a list of all the reasons why I think Indy makes sense for Appirio), I jumped at the chance to join the team.

Now that you’ve been at Appirio for a few months, what do you think really makes us different from other consulting firms?

Appirio’s successfully attracted and developed an impressive team of rockstar cloud experts and partners. I enjoy and appreciate the culture, transparency, and team atmosphere that, to this day, remains intact from day one of Appirio’s existence. At Appirio, every customer action receives backing from a dedicated and talent-rich team of cloud experts and partners who are laser-focused on customer success. The secret sauce that allows us to deliver in such a radically-efficient and different way is Appirio’s Appirio Services Platform. And it doesn’t hurt that our fearless leader Steve can bike circles around anyone (smile).

How does it feel to build something from the ground up?

This is the closest experience I’ve had to working for a “startup”. We benefit from an already well-established global network of Appirians. Appirio has given us (the Indy team) an incredible onboarding experience and also a great deal of influence and say in how we grow this office. We’re empowered with the vision, mission, and charter. Now we move to building it. Have we mentioned that we’re hiring?

Any advice for others looking to change their own career path and join the cloud revolution?

For some the idea of jumping the rails of the traditional IT steam train and hopping aboard the cloud computing bullet train may seem like an intimidating shift. I’d encourage them to do some exploration. Sign up for a free CloudSpokesaccount or a Salesforce developer force account. Spin up a free Amazon Web Services micro instance or deploy a free Google Apps organization. It’s likely they’ll find some synergies between their skillsets and what’s going on in the public cloud space today. Additionally, I’d say come ride bikes with us in the Indy office, hit an Appirian up on Twitter or Facebook, or stop by and see us atDreamforce next month. Talk with our customers to hear firsthand about the transformations they experience from our services. Our all-in public cloud services approach enables our customers’ IT organizations to spend less time, money, and brain power on “keeping the lights on” tasks and instead allows them to focus more on efforts that influence their core businesses. See how we help IT staffers get out of the data center business and get into doing business that directly affects their organizations. So check us out and come join the revolution! 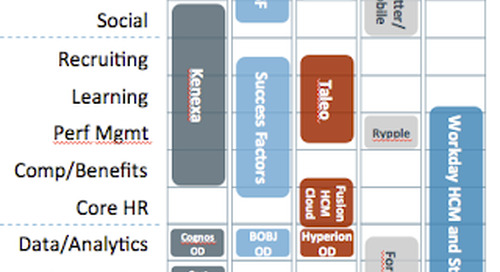 By Naoki Tsukamoto Workday filed their S-1 last Thursday in preparation for their IPO. Appirio has been a W...